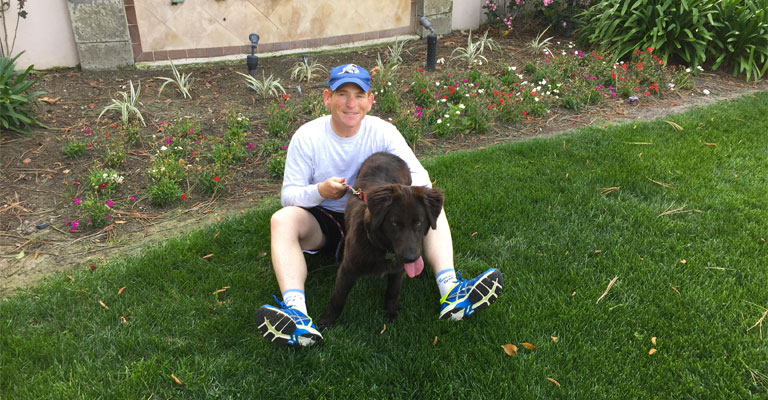 Josh Zlotlow has been selected as our first Swami of the Quarter for 2016. Every quarter we select an active Swami’s member who we feel exemplifies the traits that set a positive example for others in the club. Besides recognition on all our SM platforms, the Swami of the Quarter also receives gifts from our estore and sponsors. JZ will be receiving one of the first Swami’s Spring Jerseys off the sewing line as well as plenty of illy coffee and EAS nutrition products.

JZ’s importance in leading the Tues/Thurs morning Gene Kelly ride is best illustrated by the discombobulation of the group on the days he doesn’t show up. That example as well as leading other group rides helps build camaraderie and, with his experience, and understated style, creates a harmonious ride. We also appreciate all the used equipment he donates throughout the year. Beyond that and his lawyer duties, he and his wife are heavily involved in canine fostering. Let Josh explain in his own words:

Betina and  I are volunteers and fosters with Labrador Rescuers, which is a local and completely volunteer-based 501(c)(3) organization dedicated to rescuing, rehabilitating and rehoming stray, abandoned, or unwanted Labrador Retrievers and mixes, serving North County, San Diego, Orange County and parts of the Inland Empire. Through the help of our volunteers and supporters, we have been able to save almost 4000 dogs. In addition, every time we are able to take a dog into our program from a shelter, it helps preserve resources for the other dogs and animals.  For many of our dogs, we are their last chance, as we take dogs from shelters with medical issues and provide them the medical care the shelters cannot so they can recover and be adopted.
In the picture with me is Simone, who came into Labrador Rescuers with a broken leg and a history of abuse. It was so bad that the veterinarian thought she might have suffered brain damage. She finds Sock Guy socks to be great toys when left on the ground and she believes they serve a higher purpose in being chewed on that being worn on my feet.

More on Josh that our inquisitive reporter Therese Nugent gleaned from him recently:

What are some of your earliest cycling experiences?
My earliest cycling experience was the journey of just learning how to ride a bike. It took me much longer than the other kids in the neighborhood, but I eventually got the hang of it. Fast forward a couple of years I remember after we moved, it seemed like a big deal just to make it up the very small hill on that street. A few years later, I was going out on the bike trail with my dad on weekends and then it ultimately turned into pretty much every day.

When did you decide to join the Swami’s Cycling team and what attracted you to the group?
After I moved back here, I started doing the Gene Kelly ride and the Swami’s “lite” rides on the weekends along with the Tuesday Night Ride. Even though I was racing at the time and there were more people on some of the other local clubs at races, Swami’s seemed like the natural fit since I thought I should belong to the same club as the guys I was riding with all the time. Basically, it was a great group of guys (and some gals) who rode for fun and beat the tar out of each other in the process. Since I both lived and worked in Encinitas at the time, it was impossible for a club to be more “local” than Swami’s. Also, this was back in the era when Dave Callendar was president and one of his greatest strengths in that role was making new people feel welcome.

Sounds like you are an honored member of the Gene Kelly group? What do you like about the early morning hammer fest?
Well, I started doing that ride shortly after I moved here. It gets me out of bed (early) in the morning and that’s a huge plus since it’s much easier to drag myself out of bed and out the front door when I feel like I have an appointment at 6:30 sharp. Beyond just getting an early start to the day, the day feels so much better afterwards. Sometimes, the part that feels best is being done. It really wasn’t so much of a hammer session when I started, though it was a pretty spirited ride. Beyond the riding aspect of the Gene Kelly Ride, the coffee stop afterwards is really good. After all, any morning ride should finish with coffee.

What is your favorite ride?
The Gene Kelly Ride since it’s just a great start to the day.

Tell us about one of your first bikes and/or your favorite bike.
The first bike I had that I can remember was a red Schwinn. Outside of my Cannondale, I am also quite fond of my Ridley Noah SL since it just looks fast and makes me think I’m faster. In addition, I am also quite fond my pink Serotta from RAAM because of the fond memories. I really I don’t know if I’ve ever met a bike I didn’t like since any time I’m riding one, I am doing something much more fun the virtually anything else there is to do.

What kind of bike racing do you prefer?
Time trials have always been my favorite event because you get to leave everything out on the road. Other than genetics, luck does not play much of a role. Plus, relative to my overall abilities, I’ve always been good at them since I can get fairly aero and suffer a lot. Basically, you get to your redline, try to hold it and keep thinking to yourself that it will be over soon.

Do you have any cool nicknames?
I didn’t think JZ was a particularly cool nickname as it’s just my initials.  It’s not as cool as Johnny Drama (though that is more with loving mockery) or Albert Jet. I do think the pronunciation of my initials has been degraded by the performer, especially since his checks don’t come to my house. I did once think I should have gotten a free mountain bike from Fisher when they named one after me, but somehow it must have gotten lost in shipping.

If you could be any famous cyclist for a month, who would you select?
Of people who are racing now, it would be Peter Sagan; I would take all the local Strava sections hold them for a very long time. For a non-racer, it would be John Kerry since I would have hopefully have a good grasp on everything going on the world for that time.

Tell us something surprising about yourself.
I was the last kid my age in the neighborhood to learn how to ride a bike. Other than that, I was on a reality show, Indoors Out on the DIY Network and there was even footage of me in my Swami’s kit and on my Cannondale that got aired about 80 times on basic cable.

Have you participated in other competitive sports?
I did one year of little league in third grade and several years of soccer, with my last being in 7th grade. Other than that it’s been cycling on and off since the fall of 1988. My first race was in 1989 (the Junior 15-16 Category 4s at the Camelia Festival Criterium at Arco Arena, which Phil Tuttle won) and it’s been a few years since my last one, though I will probably start doing time trials again.