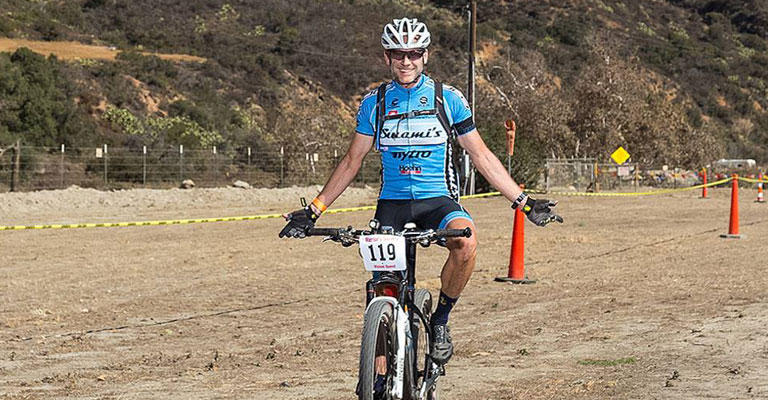 Every quarter we select an active Swami’s member who we feel best exemplifies the traits that set a positive example for others in the club. Besides recognition on all our SM platforms, the Swami of the Quarter also receives gifts from our estore and sponsors.

Matt Sparks has been selected the Swami of the Quarter for his selfless work on behalf of Swami’s. As our Club Advocacy Representative at community meetings he has spent many hours espousing our views on bike and pedestrian issues in the community. In addition, he continues his “Police” work on Swami’s group rides, making sure other cyclists are adhering to the laws of the road.

For that we are grateful and I can speak for the general membership as well in thanking him.

Swami Of The Quarter – Matt Sparks

1. What’s the 1st thing you do each morning?
Make a pot of loose leaf Yorkshire Gold tea.

2. What do you eat for breakfast?
Either a poached egg on toast or oatmeal. Or cake.

3. Coffee?
Thanks to our sponsor Illy, I grind some whole beans, extract an espresso shot, foam some milk and make a Cafe Latte before work.

4. What is your first bike memory?
I have no ‘Pre’ bike memories, I may have been 2, who knows? We lived in the country, on a 20% hill. My brother and I used to put a plank on our Big Tonka Semi trucks, and ride them down the hill, braking with our wellies. Then the same hill on a 3 speed shopping bike, then a 3 speed roadster, then BMX etc.

5. What are some of your earliest cycling experiences?
Nearly all my early experiences were with my brother. We rode on technical MTB tracks around the Devonshire countryside. And for shits&giggles..did silly stuff that included:
Ride across a ploughed field with eyes closed.
Ride up our drive, endo, ride back down backwards.
Ride along each holding the others near side handlebar.
Ride head on, brake to an endo to bump helmets as our front wheels touched, roll out backwards and flip a 180 to ride off forwards.

We did a 7 day off road mountain bike trip across the Lake District mountains in 1985. 6 days of rain. We were probably some of the first bikes in the mountains in the UK. Certainly before land use issues arose. People were just baffled.

Yeah, and when I was 12 I hit a traffic island and 6 spokes/ nipples cut my nose and upper lip in separate flaps. That was memorable.

6. Which famous cyclist would you want to be for a month
Sagan. Ya know we’re pretty similar; he’s European, I’m European. He ride tricks, I ride tricks. He mountain bikes, I mountain bike. He won the Green Jersey in the TDF, I won the Swami’s B’ “fastest of the slowest / sandbagger / tallest midget race series..

7. What is your favorite bike ride?
“One with friends.” and to that point, last summer I got to ride with my brother again after about 10 years, on his Saturday ride, Mt Ventoux.

Locally, Glendora Ridge Road is fantastic. That stage of the T.O.C. is truly world class: Climbing, descending and the views!

8. What is the best cycling advice you’ve ever received?
Nah, that’s boring. The best advice I’ve given my wife?
Honey, you’ve just got to pedal faster.

9. How did you wind up joining the Swami’s Cycling team?
I was riding the Saturday A ride for years before I joined. When I moved to North County my neighbor Paul Paez convinced me to do the Tuesday ride.

10. Do you have any cool nicknames?
Sparky, Sparkatron and Ted.

11. What is your current role on the Swami’s Cycling team?
I do liaison work with the City of Carlsbad that includes giving input on things like bike lanes and sharrows. They need real bikers to contribute because as a clean form of transportation, bicycles factor greatly in the City Mobility plan which is in turn part of the City General Plan, hence part of the California plan. ~ Perhaps no longer part of a national plan? Although you could argue that carbon bikes are made with coal.

12. What issues do you prioritize in your role as the Club Advocacy Representative at community meetings?
I represent the “Lycra” side of cycling so I put forward points of view based on how we ride as a club. There are several other points of view being given to the city, so I try to moderate in favour of pragmatism and getting the most out of the changes being made.

13. Can you highlight any recent work?
We were part of team that advised on the brand new part of El Camino Real between Tamarack and Cannon. I don’t know if the morning rides will go back to ECR, I like the hills of CVD, but El Camino is going to be really nice.

14. What do you do to share the message with Swami’s and other cyclists?
I ask people in the group rides to stay in the bike lanes. We argue that we need wider bike lanes, and then “the group” rides along outside the lane?? It’s terrible PR…it’s being noticed and people are complaining to the city. The argument for wide bike lanes then falls flat. I consistently see experienced Swamis ride for extended distances two abreast with one person in a wide bike lane and the other… outside the bike lane. It’s lack of situational awareness. It is the job of the last person to pull through and lead the pace line, to be in a position that allows everyone else to stay in the bike lane.

15. What’s your favorite phrase to say to to stop shenanigans on the group rides?
Be mindful of your position in the group and stay in the bike lane!

16. Your Best bike?
My current road bike, a 2011 Dogma 60.1 not the lightest but is handles so well. Better than ANY other bike I’ve owned. Like it knows what I’m going to ask it to do before I ask. A lot like a perfect carving ski, or the Supermarine Spitfire….

17. If you could swap bikes with any Swami who would it be?
David Wiese, and he wouldn’t know about the swap. Meaning that his bike wouldn’t be where he left it.

18. Ascent or descent? (or accent?)
Both – but not flat. Definitely not flat and windy. The Baldy Stage of the TOC is perfect; fairly hard climbing and fun wiggly descending.

21. How did you choose this career?
It chose me. I was a corporate pilot for a Real Estate developer and worked in the office when I wasn’t on a trip. Then I was asked to train someone else to fly the plane, the day I signed that person off was a major bifurcation point of my life.

22. What other job would you like to try?
Fighter pilot. It’s all I ever wanted, but I was born in the the wrong country at the wrong time, and it was never an option.

23. One of your guilty pleasures?
Putting blueberries and non fat greek yoghurt on the top of the ice cream and then saying, I’m not going to eat any/much/all of the ice cream.

24. What are your 3 most prized possessions?
My memories, my wits, my health.
But I do tend to buy the best or wait until I can.

25. Tell us something surprising about yourself.
For the last 18 years I’ve shaved with a straight blade razor made by a French Master Swordsmith. It grew to have a lot of meaning when I was flying. “Don’t get complacent just because you do it every day. It can always still kill you” Something most people are guilty of behind the wheel.

26. What other competitive sports have you done?
Triathlon/Xterra

29. Weirdest thing you’ve ever eaten?
Did I tell you’ve I’ve been to 30 countries and lived in 4?

Some ‘seriously don’t ask insect’ shit in Thailand #crunchyyetslimy.
Baby camel, a whole one, on a 6ft platter of rice, served on behalf of the Emir of Qatar. BUT it’s so good. Like lamb but better.

Whale and puffin in Iceland. Puffin, well-blackened seabird, tastes like it sounds.
Whale steak; we were fed it and then they translated. But it is the best meat you can ever eat by huge margin. The whale population depends on Mid-westerners not getting to taste whale.

30. Tell us about the snack in Oman
It was by far the best. 1995. Raw sun dried chicken jerky in rancid butter, served to me by the women of the al Riyamy tribe, in a village two days walk into the Jebel Akhdar mountains of Oman. (Google it) I was the first white guy some them had met, and the Matriarch pulled forward their Eid feast and insisted I stay for it.

31. And then what?
Oh and it gets better. Where were the men? When I was finally allowed to leave, the men arrived exactly as you imagine, hot, tired, dusty, teeth missing and with old yet clearly working AK’s. And a young Brit had eaten their dinner! Most of them actually were in the army and spoke some English because the S.A.S. train in these mountains. They didn’t kill me. They insisted that I sit with them for hours at the men’s Eid feast and eat raw sun dried chicken while they practiced their English.

32. Favorite Band:
Not really a band.. Above and Beyond

33. Best gift you’ve ever received?
Growing up in rural England while being shown other parts of the world without prejudice.

34. What is your favorite movie of all time?
Blade Runner, no – Top Gun. Yeah, Top Gun: Concurrently the best and worst movie ever made, certainly the funniest based on The Martian ’s Oscar win.

35. How would you describe yourself in 3 words?
Loyal, honest, contrafunambulistic