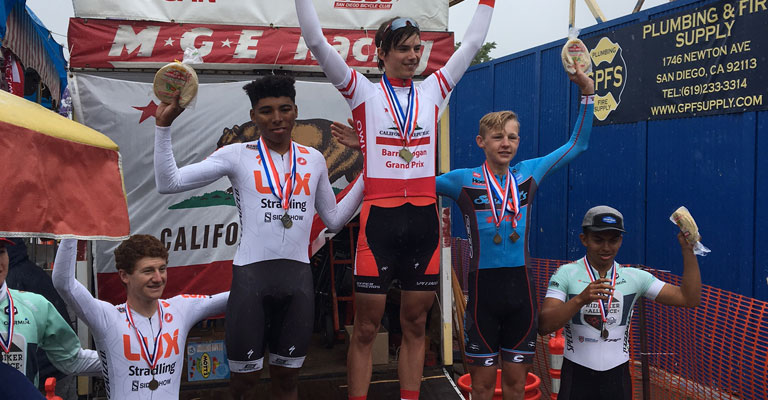 McKenzie Steiner won the Women’s Junior 17-18 State Criterium Championship with an impressive win at Barrio Logan. While representing the the DET in a splendid fashion, her younger team mate Makayla McPherson tallied another impressive win in the Women’s 13-14 division.

Megan Jastrab on the same day while racing as a guest rider for the Women’s Pro Team Amy D Foundation won the bunch sprint for second at the Redland’s Bicycle Classic in a tough women’s pro field in the criterium and finished as one of the top juniors in the field. All the more impressive as she was racing with junior gears among a strong women’s pro field.

As far as the males representing the DET team, Megan’s brother, Ryan Jastrab placed a solid third place for a State Criterium Championship Bronze Medal at Barrio Logan in the Men’s 17-18 race as well with his team mate Jacob Ingwerson netting a solid 2nd place in the Men’s 3/4 field.

At the Kern County Jumpstart Junior Stage Race Makayla placed second in the Men’s 13-14 criterium race, while Ryan Jastrab won the 17-18 criterium netting him second overall in the stage race. Megan racing in the Men’s 15-16 race took second in the time trial and the road race and finished third in the GC standings. Makayla MacPherson finished third in the GC results racing with the Men’s 13-14 field. McKenzie Steiner took the GC for the Women’s 15-18 Stage Race.