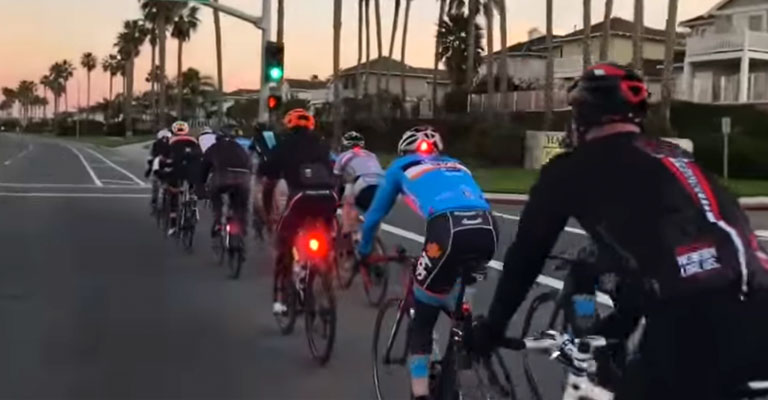 The Tuesday/Thursday morning (Gene Kelley) B Ride utilizes a rotating paceline when it moves north along the coast and sometimes on Cannon before reaching Faraday, and sometimes again on College before the descent toward Palomar Airport Rd.  Lately, it appears the paceline has become a bit frenetic.  So this is a friendly reminder.  Continuing education, if you will.  To those who are unfamiliar with pacelines, please read and consider using this method on your group rides (Note – There are several different types of pacelines [including echelons] but we will just focus on the rotating paceline).

In a perfect world, a rotating paceline would allow the entire group to move at an even speed throughout the rotation, no gaps would form, no braking or surges would be necessary and those in the recovery lane would get a nice break before traversing to the advancing lane.  The idea is to bring a continuous flow of fresh legs to the front for several seconds resulting in the group’s ability to move significantly faster than a 2 x 2 rotation, for example.

You will notice that when we head north along the coast the rotation moves in a clockwise fashion and the recovery lane is to the right (or east).  This is because the prevailing wind is coming from the west.  This allows more protection from the wind and, hence, better recovery.  Generally speaking, if there were Santa Ana conditions, the rotation would move in the opposite direction (counterclockwise).  A number of you would probably argue that an echelon is more appropriate in a cross-wind.  And you would be correct, except we need to consider that we only have so much space to operate (ie, the bike lane).  So let’s stick to the paceline, eh?