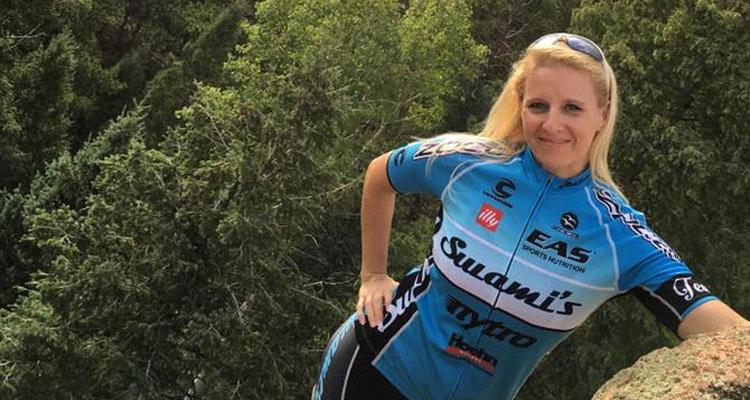 When Swami of the Quarter, Diana Siverts was selected by President Fred Muir, he noted that she burst onto the scene at the Swamdo last year before she even rode in Swami’s Blue, volunteering at the aid station. Every time since that a volunteer situation arose,  Diana was one of the first to step up, culminating in the beautiful BWR aid station she so craftfully engineered this year.

In the same spirit, she offered repeatedly to help the SOTQ Interviewer, who’s on crutches. Before we even met, she offered rides, shopping and any other help needed!

1. Do you have any cool nicknames?
Growing up I was often called Princess Diana or Lady Di.  As a child my younger sister couldn’t say Diana so she called me DeeDee which then turned into just “D” and that stuck.  Close friends and family call me D – Please feel free to call me D.  🙂

2. What are some of your earliest cycling experiences?
As a kid I loved being on anything that had wheels!  First was my Big Wheel Tricycle, then my bike with the banana seat, pompoms on the handlebars and flag off the back, and then my treasured red 10 speed Schwinn! AhhhhI I remember the freedom I felt being on that bike!

One of my first memories of what I thought was “real riding” (in the mind of child) was with my Dad.  My Dad would ride his bike to work everyday. I must have only been 7-8 years old at the time and I’m sure my Dad took me a different route than he normally took to work, but those 7 miles with my Dad, in the early morning hours, on my banana seat bike, was one of my best memories on the bike! I felt so proud to have ridden ALL THE WAY to my Dad’s work!

3. What is your favorite ride?
My current favorite ride is out to Torrey Pines for  repeats.  Sometimes I ride inside route, sometimes outside route, and sometimes both!  The view takes my breath away and reminds me why we pay such high prices to live in San Diego!

4. What are your 3 most prized possessions?
First my nursing degree.  I have done and seen so much in the 25 years I’ve been a nurse, I can’t imagine being in any other profession! Ten of those years were spent being a travelling nurse and another few years as a nurse in the Navy.  Now I work in the Trauma ICU and Recovery Room.  Unbelievable experiences and I love the opportunity to help others!

The other two aren’t really possessions but truly are blessings to my life.  My two boys.  Alex is 11 and Danny is almost 8.  I have learned more from them and from being a mom than I ever thought was possible!  They are the light in my life!

5.  Have you ever had to use your Trauma expertise on a ride?
Thank Goodness I have not needed to use my trauma skills on a ride!  But honestly calling 911 and getting the ambulance with all the equipment there is the most important thing to do on scene of a crash and really anyone can do that!

6.  Tell us something surprising about yourself
I love rock climbing!  I just recently got into “real” rock climbing.  As a kid growing up in the mountains of New Mexico and Colorado I was always climbing up the side of some mountain, it wasn’t until recently that I started using the ropes and harness!  And I am hooked!  Love it!

7. If you could be any famous cyclist for a month, who would you select?
I would love to be Lance Armstrong so I could know what the freak really happened!  Get inside his head and know the real truth!

8.  What other competitive sports have you done (or do you do now)?
A few years ago I started taking TaeKwonDo with my oldest son and I was nationally ranked for my age group before I broke my foot in sparring class.  My interests have now moved on to doing a triathlon before I turn 50! (not that far away!) Now that I’m able to run on my foot again I really want to start training for my first triathlon!

9. How did you wind up joining the Swami’s Cycling team?
I have been with the group less than a year now. I remember seeing Swami ‘s riders and had heard of the Swami reputation ( the “really fast cyclists”) but never considered myself that level of a cyclist.  My first interaction with the group was at the Swamdo last year. I had injured my foot in taekwondo sparring class and wasn’t able to ride so I volunteered for the Swamdo Aid Station which I had heard about through the Team Fun Meetup Group.  After having a blast at the station and the after party at Karl Strauss, I was considering whether I should join or not (it was more of an internal conflict… I didn’t think I was a good enough cyclist to be a Swami).  It was after riding and chatting with Bryon Black that I decided to join.  He was talking to me about Club Night and all the cool discounts but you could only take advantage of if you were an active member.  So I joined that day!

I am so glad I did!  It has been great for me to be apart of the club!  I would never have joined a club like this otherwise and now I am a proud member of the “really fast cyclists”!  I was also going through a divorce and I really needed to be around the positive and active energy of the group!  Fred mentioned how much I’ve done for the group in my short time as a Swami, well the group really has done more for me!!  I truly feel honored to ride alongside such great cyclists and really wonderful people!