Dr. Kent Howard, DMD is Swami’s longest-running sponsor and one of the club’s longest active members. He currently practices dentistry in the beach community of Cardiff-by-the-Sea, Encinitas, California. Swami’s is grateful for Dr. Howard’s dedication to the club and his generous support to Swami’s over the years. We had the opportunity to interview him for the August eNewsletter.

Swami’s: Dr. Howard, when did you start cycling?

Dr. Howard: I started cycling around 1980 while rehabilitating my right knee after its third surgery. I bought a used Masi Gran-Criterium and started showing up for the Wednesday ride. On Saturdays, we also rode the Swami’s loop through Elfin Forest and back on Del Dios Highway. In those days, I was a triathlete and the first Swami’s kits were pink (sponsored by Jane Cosmetics).

Swami’s: When and why did you join Swami’s Cycling Club?

Dr. Howard: I joined Swami’s after about 8 years of triathlons. Of the three sports, I enjoyed cycling the most! It’s a great workout and great to chat with friends at the same time.

Swami’s: Do you have any memorable stories to tell about your time with Swami’s?

Dr. Howard: My favorite story was when I was late for a Wednesday ride and my friend and coach John Howard showed up and said, “Let’s catch the peloton.” We spun up to 25 mph, and I was on his wheel. After about 15 minutes he said, “Kent, let’s pick it up. It hurts too much to go this slow.” We did and caught the peloton!

Swami’s: What is your favorite route to ride in San Diego?

Dr. Howard: My favorite route in San Diego is the Elfin Forest loop. It’s easy to get to from my house! 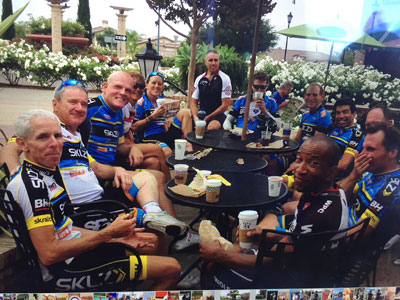 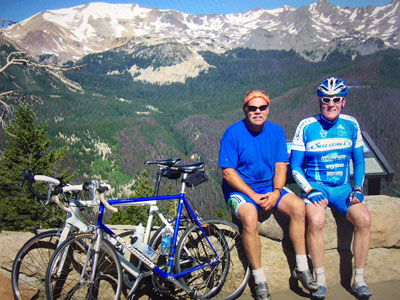 Swami’s: If you could cycle anywhere in the world, where would it be and why?

Dr. Howard: I love to cycle in Colorado. We used to do Mt. Evans, which is 14,200 feet on top and is the highest paved road in North America. We also rode to Rocky Mountain National Park, which is 12,500 feet on top. (See picture with my brother.)

Swami’s: How long have you been practicing dentistry?

Dr. Howard: I have been a dentist for 43 years now. Cycling counters the stress of working in the mouth!

Swami’s: What is the #1 thing a patient can do to ensure healthy and long-lasting teeth and gums?

Dr. Howard: I don’t know, but a good toothbrush works great to clean your bicycle chains!