About ten days ago, Gina suggested to our leaders’ group that we head out to the locally famous “Great Western Loop” before “the weather gets too hot again”. I was thinking that since it was already mid-week, we might want to give people more notice for a ride that starts a 30-45 minute drive away. I suggested we do the route on Saturday, 1/20, and Gina said (almost presciently), “Hopefully the weather stays cool.”

Funny, the originally proposed date of Saturday, 1/13, turned out to be a day of almost record heat, with Santa Ana conditions in the mountains of east county making it surely even more dangerous. We were thinking we had dodged a bullet there (I had not, since my marathon was that day, but more on that another time).

The following Saturday was looking to be 100% perfect for an East County ride – high of around 60 degrees, sunshine, and moderate winds. There was maybe going to be some coastal rain on Friday, but the likelihood seemed quite low and the rain in the forecast came and went all week. We posted the route early in the week, with hopes of catching some great action shots with the incredible mountain views in the background.

It never did rain on Friday, and while there was a coastal wind warning, the weather in the El Cajon area seemed like it was going to be fine; perhaps a little cool, but hopefully not too windy. I packed up two vest choices, two glove choices, arm warmers, leg warmers, a bag of extra socks to sell in case anyone wanted to get in on this years’ sock game. I’m not usually that prepared, but I’ve been caught out in that area in less than ideal conditions a few times (or, every time I go), and I specifically remember David almost getting hypothermia on the Alpine Challenge one year (the next year it was in the 90s).

We gathered at the generally accepted starting point for the GWL adventure, the Starbucks at 2512 Jamacha Road. There were two other crews setting out from there that day. We had a solid crew of around 28 riders split across the C and D groups. I had obsessively checked the radar on the way down in the car, and while there was actual snow falling on the highest elevations at Mt. Laguna, closer to our route there appeared to be only light, spotty, small cells of showers. Surely they would clear up soon and we’d be shedding our layers in no time. Surely.

The sky to our east told a different story, but we headed off in high spirits for a challenging, yet doable 40 mile ride. I recall telling someone in the parking lot when they were complaining about the cold that, “It really wasn’t so bad.”

I thought I hadn’t been on this route in this direction before, but as soon as we got on the first main climb, everything started to look strangely familiar. We were joking about the false summits all along that never-ending climb that we remembered from last year’s Alpine Challenge, but I was feeling smugly satisfied with myself that I felt pretty decent, all things considered, one week after the marathon. Smiles all around as we reached the final true summit of that climb, with our group catching and passing both the groups that headed out well before our take off. We were sort of considering removing a layer of two, what with that long climb causing the heat to rise, but decided we better start to head off before we got wrapped up with the other groups again. Just as we pulled out, I started to feel a few drops, but before I could even process the rain, the true pelting began. I wasn’t sure if I could believe my eyes… was it hailing in Southern California?

In front of us was a wide open view of the valley floor, but there was nothing on our minds but survival at that point. Jackets went back on, as the hail pelted our skin on the 30+ mph descent. Nothing but dark clouds on every horizon, the hail continued, mixed with fairly heavy rain, for about the next four miles. It was every man and woman for themselves at that point. We were spread out, each in our own personal agony. A few folks decided to bag it and turn around, while most of us didn’t even take the time to consider any options but plowing ahead, hoping the hail would stop… it had to, right? And that blue skies were over the next hill.

Unfortunately one of those hills turned out to be a solid 13% grade, and I wasn’t sure how much worse things could get. Then, there was thunder and some seconds later, a flash of lightning. I’m going to come right out and say this, because I think this is a very reasonable fear, like fears of sharks and bears (which I also have) – I am afraid of lightning. I almost froze up completely, but as I looked around me through the fog of my glasses, I saw there was truly nowhere to take shelter. My logical mind started the bargaining process with my anxiety, explaining that surely the lightning would hit the transmission towers… or the…. cactus? Yikes. Just as I was considering how much metal my bike contained, and Steve Ummel questioned if carbon is a conductor (it is: https://www.quora.com/Does-carbon-fibre-conduct-electricity-Why-or-why-not), there was more thunder and lightning. I think I kind of whimpered, and Steve admonished, “Chin up!”

The rain let up a bit, but the temperatures were solidly in the high 30s (you did read that right, that says 30s, as in close to freezing, in Southern California) when we regrouped again at the halfway point. The C group decided to bypass a stop at the general store, and trudge on to the end, taking the straighter route of Skyline Truck Trail rather than the twisty portion of Lyons Valley Road – the roads were soaked, and it was raining off and on as we continued to that next meetup spot. We managed to gather together for a picture in the approximately five minutes of sunshine on that ride. Don’t worry, it started hailing again shortly after this picture was taken.

The C group managed to find their way back to Starbucks, although I brought up the rear, unable for some reason to feel comfortable on any of the wet, twisty descents that remained. Did the road repair crews intentionally coat much of the surface of that road with a material that somehow is extremely slick, yet flicks up the maximum amount of water on you at the same time? Or was that just luck? My arms were numb from my elbows down, and my feet were just blocks of flesh. I thought I was unstable due to all the frozen extremities, but low and behold, I discovered at the last light that my tire was flat. I was about as grateful to finish that ride in one piece as I have been to finish any ride. Shedding as much of our wet clothes as we had dry ones to replace, we all stumbled into Starbucks, ordered the largest hot drink they have, considered a run to the BevMo across the street for impromptu Hot Toddies, and shivered for the next 20 minutes. And laughed that half-insane laughter of the friends that have survived something that tested us all and lived to tell the tale.

Meanwhile, the D group was still out in the midst of their travails. We were wondering if we’d find them all warm and cozy in the Starbucks when we returned, perhaps having the sense to call it off when the hail started to pelt. I had my suspicions that they were still out on the road, being tougher than the average cyclist – and in fact, they were. They did choose to stop at the general store, however, to perhaps warm up and refresh with hot chocolate and take a break from the elements before plunging on to the end. One particular rider was tougher (or crazier) than all of us, wearing only her kit and no arm or leg warmers, vest or jacket. A kind patron took pity on her, saw her shivering, and let her borrow her jacket (helpfully trimmed with horse hair, which Annie is allergic to). 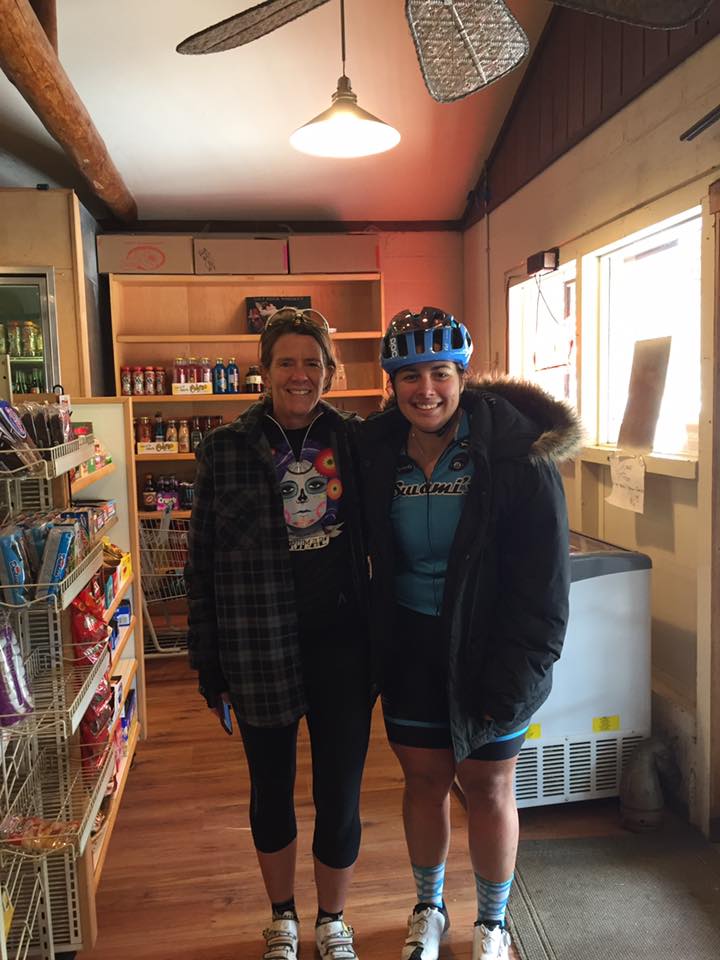 The D group managed to get a lot more pictures amidst the storm than our group! I was afraid if I stopped to get my camera out of my pocket: (a) My hands would freeze even more, (b) I’d drop and break my phone, and (c) I might curl up into a ball on the side of the road and refuse to move.

The D group rolled in all in one piece, and we all took a moment to be grateful to return no worse for wear.

There’s nothing like a little wind, cold, and hail for forging bonds of friendship! All I kept thinking last evening was, I love this team! I couldn’t ask for a braver, more adventurous crew.