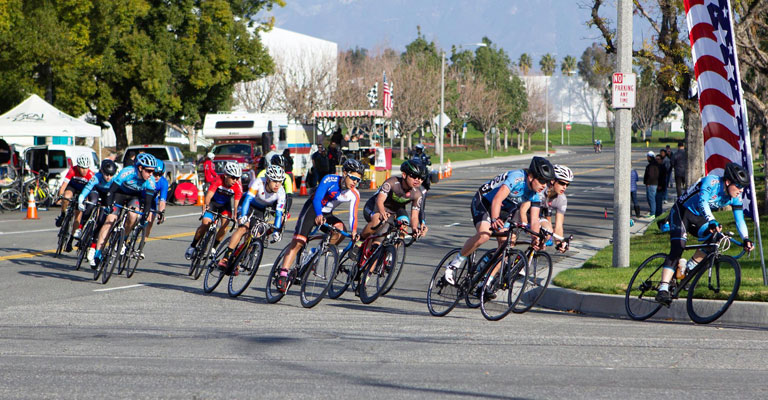 Carlsbad, CA – “What a weekend!  We achieved all of our camp goals and to see the riders execute amazing teamwork during the Ice Breaker, was a testament to the quality of the riders we have on this year’s team,” said Team Manager, Don Levy.

Over the Martin Luther King Junior holiday weekend, Swami’s Junior DET riders, rode over 140 miles in a three day camp that included all disciplines of road cycling with specific emphasis on teamwork, team cohesion and introduction to power based elite training.

The camp included a race day at Ice Breaker Criterium in Ontario, California.  In the W13-14, National Track Champion Makayla MacPherson, solo time trialed from the whistle to a commanding win!  In the M15-16, Megan Jastrab, Multi-National Champion, led out Ryder Phillips to perfectly place him in the sprint, ultimately for a 3rd place podium finish.  The W15-16 race, saw McKenzie Steiner in the hunt for podium on the last lap and a solid sprint netted the rider and the Team another 3rd place podium.

The M17-18 saw plenty of action and was brilliantly executed by the Team with every rider playing a key role.  Coach Tom Nelson implemented a plan for the six Swami’s riders in the race to keep the pace high.  Julian Levy and Levi Jeffries broke from the peloton no less than five times while Jacob Ingwerson, Ryan Jastrab and Megan Jastrab controlled the pace of the Peloton during each break.  In an unfortunate racing incident, Ryan went down and sustained minor injuries but was able to run to the finish line carrying his bicycle!  As the laps waned, Zack Villars and Levi held the break and with a perfectly timed sprint, Zack jumped and was still accelerating across the line to take the top step of the rostrum!

Mark Yaroshevsky took a solid 2nd place finish in the Senior Cat 3 event and secured his position as one to watch this season.

Swami’s Cycling Club is committed to training racers, supporting young talented athletes and has worked diligently to improve its 2017 program.  “The character and discipline our riders possess is evident in the way they conducted themselves and performed this weekend,” said Fred Muir, Swami’s President.

The Team would like to extend a special thank you to Mitch Goldman of Cosmetic Laser Dermatology for joining the team for a training ride and providing sound mentorship.